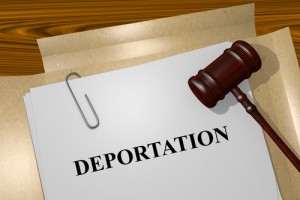 A Chicago Army veteran is asking his senators and filing an appeal to stop his deportation, CBS Chicago and WGN reported Sunday.

An immigration judge ordered Miguel Perez Jr. deported last week because of a conviction for selling cocaine. Perez was a green card holder who had lived in the United States since he was 8 years old. Both his children, ages 12 and 18, are U.S. citizens.

Perez, 38, served two tours in Afghanistan, which left him with post-traumatic stress disorder and a brain injury from an explosion. Perez’s attorney, Chris Bergin, said Perez began to self-medicate with alcohol when he got home from his tours. His family and friends said the injury and his PTSD made it difficult for him to find work when he returned to Chicago. They said he then started to sell drugs.

Perez served seven years in prison for his crime. He thought he became a U.S. citizen automatically because of his Army service, according to ABC7 Chicago. But that wasn’t true, and there are numerous crimes that can revoke the lawful permanent residency of a green card holder.

Perez had argued in immigration court that he could be killed if he returned to Mexico. But that argument failed, and he was ordered to be deported last week. He remains in U.S. Immigration and Customs Enforcement custody pending a decision of the Board of Immigration Appeals, which considers appeals from immigration courts. Bergin expects a response in three to five months, according to CBS.

Sen. Dick Durbin of Illinois, a Democrat, didn’t directly comment on the situation to WGN, but he said it was “a complicated case.”

“We don’t want dangerous people to remain in this country, but we ought to have our eyes wide open,” Durbin said. “Here’s a man who risked his life for this country, maybe he can pay his price for what he’s done wrong here and still get a chance to stay here.”

CNN said Perez’s mother appeared at Chicago’s federal building last week while Rep. Luis Gutierrez, a Democrat, met with ICE officials inside to ask for mercy in several cases. Gutierrez staged a sit-in when it became clear that he wouldn’t get answers, and he was briefly handcuffed.