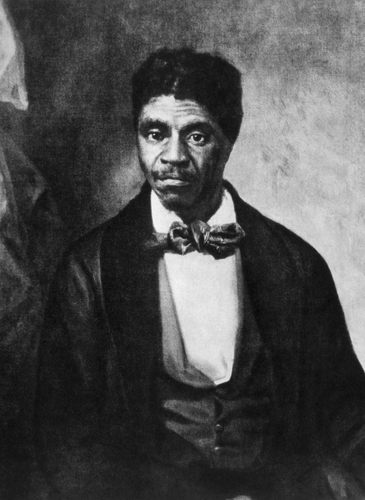 Descendants of Dred Scott and Roger Brooke Taney—the U.S. Supreme Court justice who wrote for the majority in the 1857 opinion that found black people were not citizens and had no rights to sue for freedom—came together this week in Annapolis to share a story of reconciliation.

The families met for the first time last year, the Frederick News-Post reports. They have agreed to raise money to rearrange a brass statue of Taney, so it appears that he’s in dialogue with new statues of Scott and Frederick Douglass. The Taney statue, erected in 1872, is located next to the original door of the Maryland State House, and earlier this year a bill was introduced to remove it, the Baltimore Sun reported. It’s been one of many times people called for removing Taney’s statue.

“Today, for all the Taneys … we offer our apology to the Scott family and all African-Americans for the injury caused by Roger Brooke Taney and this decision,” said Charles Taney, a descendant of Augustus Taney, who was the Supreme Court justice’s brother.

Lynne Jackson, the great-great-granddaughter of Dred Scott, also spoke at the event, which marked the 160th anniversary of Dred Scott v. Sandford (PDF).

“They are so sincerely willing to be out here. And I just commend them for that because a lot of people would just say, ‘I don’t think I want to go out there and do that,’ especially in the climate that we’re in,” she said. “But that’s exactly why we need to be out here. If the Taneys and the Scotts can be reconciled, why can’t anybody else?”