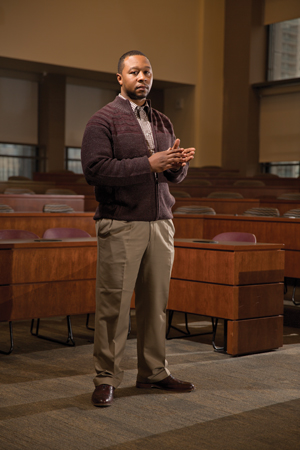 Ten years to the month after Jarrett Adams was released from prison for a rape he didn’t commit, the newly minted lawyer was in court this week representing another prisoner in similar straits.

Adams was featured in the ABA Journal along with those of two other exonorees who went to law school after their convictions were found to be wrongful.

Adams was admitted to the bar last July and works in New York City for the Innocence Project. During three days of hearings in Dane County Circuit Court in Madison, Wisconsin, Adams got his first speaking role as a lawyer when he examined two witnesses on the stand.

“They threw me right in the deep end,” Adams quipped in an interview. “It’s a good thing I can swim.”

Innocence Project colleague Bryce Benjet brought Adams into the case soon after he came to work there last July. At the hearing this week, seeking a new trial based on DNA evidence they believe exonerates their client, the two were joined by Keith Findley, director of the Wisconsin Innocence Project at the University of Wisconsin-Madison.

Adams, 36, had been sentenced at age 17 to 28 years in prison for rape. Findley had represented Adams in getting the Chicago-based 7th U.S. Circuit Court of Appeals to rule that Adams’ lawyer had been ineffective because he’d failed to call a key witness to the stand. Prosecutors then dismissed the charges against Adams. He had spent nearly eight years behind bars before the Wisconsin Innocence Project got him freed.

“Now I’m working to do the same for others,” Adams says.

This week, Adams called two experts to the stand to help persuade the judge, who had the case at trial years ago, that DNA evidence indicated Richard Beranek was not the rapist, the Chicago Tribune reports.

The legal team also is challenging trial testimony by an FBI agent who analyzed a hair sample, saying that the agent improperly led the jury to believe it showed Beranek was the attacker. They came up with a 2015 letter from the FBI to the Dane County District Attorney’s office alerting officials there that the agent’s testimony in a number of cases had “exceeded the limits of science.”

Beranek also had six witnesses who were with him in North Dakota at the time of the rape in Wisconsin. This week the judge scheduled briefing and set oral argument for the first week of May, Adams says.