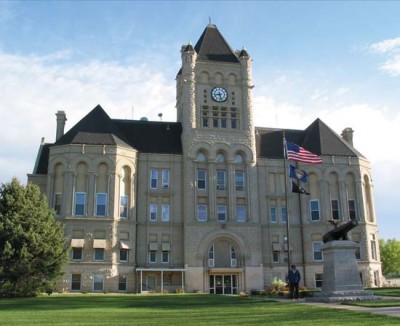 The Gage County Courthouse in Beatrice—one of the Nebraska county’s few assets. Photo by Cheryl A. Meyer.

The rural county of Gage County, Nebraska, may have to file for bankruptcy because it can’t afford to pay a $28.1 million judgment to six people who were wrongly convicted in a 1985 rape and murder.

The award, with attorney fees, is expected to reach $30 million, a “mind-boggling” sum in a county that collects about $8 million in taxes a year, the Associated Press reports in a story published by the Washington Post.

County insurers say the judgment isn’t covered by insurance. Median household income in the county is about $35,000, and residents are unlikely to approve raising property taxes above a state constitutional limit, according to the article. The state’s attorney general has said a state loan program does not provide a remedy, the Lincoln Journal Star reported last fall.

The award is for three women and three men who spent decades in prison before DNA evidence exonerated them in the rape and murder of 68-year-old Helen Wilson. Their civil rights case is on appeal, but experts say the award is unlikely to be overturned, according to the AP story.