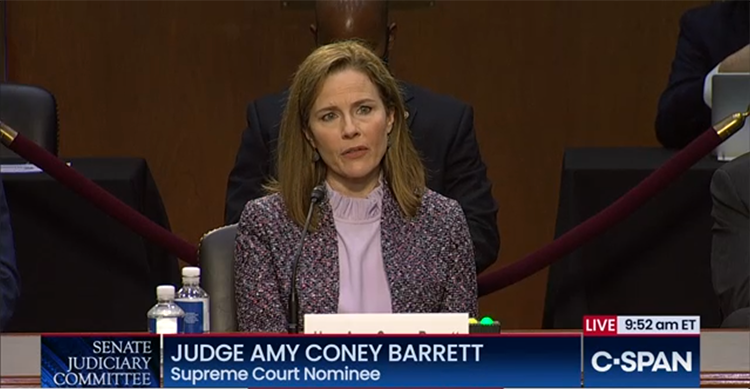 Lawyers and judges who spoke with the ABA Standing Committee on the Federal Judiciary had high praise for Supreme Court nominee Amy Coney Barrett.

Barrett is “an intellectual giant” with a “staggering academic mind” who is “decent, selfless and sincere.” She has a “stellar judicial temperament” who shows no sarcasm in her questioning.

That kind of praise led the ABA standing committee to conclude that Barrett met the highest standards of integrity, professional competence and judicial temperament, the three criteria used in its ratings of federal judicial nominees.

Barrett received a “well qualified” rating, the committee’s highest rating, from a substantial majority of the committee.

Randall Noel of Memphis, Tennessee, the chair of the standing committee, explained the reasons for the “well qualified” rating in prepared testimony for the Senate Judiciary Committee, which is holding Barrett’s confirmation hearing this week.

Noel and lawyer Pamela Roberts of South Carolina, the lead evaluator in the standing committee’s evaluation of Barrett, were scheduled to appear before the committee on Thursday.

The standing committee consists of 19 lawyers who conduct nonpartisan peer reviews of federal judicial nominees. The committee relies on confidential assessments of judges, lawyers, law professors and deans, community leaders and others with knowledge of the nominee. The committee invited 944 people to provide input on Barrett.

Barrett earned plaudits on all three criteria of integrity, professional competence and judicial temperament, Noel said. The standing committee’s rating is not based on Barrett’s philosophy, political affiliation or ideology.

First, in the committee’s evaluation of Barrett’s integrity, lawyers and judges were uniform in their praise, Noel said in the prepared testimony. “Most remarkably, in interviews with individuals in the legal profession and community who know Judge Barrett, whether for a few years or decades, not one person uttered a negative word about her character.”

Noel offered some representative comments, including:

• Barrett “is incredibly honest and forthright.”

• Barrett “is exactly who you think she is,” and, “Nothing about her is fake.” She is “good, decent, selfless and sincere.”

• “A casual observer might think that she sounds ‘too good’ to be real, but she is very genuine.”

• Barrett is an “exemplar of living an integrated life in which her intellect, integrity and compassion weave the different threads of her life together seamlessly.”

“All of the experienced, dedicated and knowledgeable sitting judges, legal scholars, and lawyers who have worked with or against Judge Barrett had high praise for her intellect and ability to communicate clearly and effectively,” Noel said in the prepared testimony.

These were among the comments he cited:

• “From an early age Judge Barrett’s scholarship was evident; an award-winning student, top of her class in college and law school, in addition to being an executive editor of the law review.”

• “A brilliant writer and thinker,” Barrett is also “quite pragmatic.” She has a “friendly, collegial demeanor and is respectful of everyone.”

• Judge Barrett is “an intellectual giant with people skills and engaging warmth.”

• “The myth is real. She is a staggering academic mind.”

• “She was always willing to be helpful and engage with others on a topic even when she had a different philosophy and when she writes in dissent, she is very collegial.”

• Barrett “never raises her voice and there is no hint of sarcasm in her questioning. She is also a good listener.”

• Barrett is “kind, caring and compassionate.” She is “extremely well-liked by faculty and students universally.”

• Barrett “has demonstrated stellar judicial temperament in all settings: She is often described as a ‘good listener’ who makes time for people, whether they are law students, law clerks, colleagues or friends.”

A minority of the ABA standing committee rated Barrett “qualified.” Noel’s statement did not explain the reason for the minority’s rating.